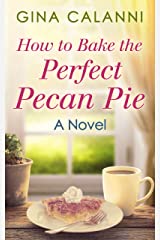 How to Bake the Perfect Pecan Pie was not my first book. Prior to Pecans, I had written a different story that was completely different from Pecans. Someday, I hope to give that book the proper edit it requires in order to be read by anyone else. I didn’t realize until writing Pecans, working with professional editors and copywriters, how much work that book needed.

However, I had been in the process to get this book published, by researching agents and working with critique partners, when I saw an ad for a holiday novella contest via Avon. I love all things holiday related, so I thought-why not?

The contest was to write a holiday novella and if Avon liked it-you would be offered a publishing contract. Voila! I was so excited. I began to imagine what my story would be about. I knew it would be set in Texas and I decided it would be set at Thanksgiving as that would lead into the next book in the series. I was already planning out a second book for this story that had not even been written.

I set out a plan and jotted down a few notes about what the novella would be about. At this time, in my writing career I was what people refer to as a “Pantster” writer. Pantsters, in general do not plot things out ahead of time. We just write as the images come to us and run with it.

Now, I am very much a “Plotster” where I plot out each chapter. I decide what each chapter will accomplish in moving my story forward and what the climax is of that particular chapter. Now, things pop in and out as I am writing the scenes but I still keep to the plot.

The story of Pecans came about as I would ponder about the sparse homes on the back country roads I would pass on my way to visit my mom. On one particular road, there is a pecan farm and it would always catch my attention as there is a huge squirrel statue that is in front of the store.

Funny story, is I had never stopped into this store until many years after Pecans was published. The pecans are indeed the best as described in Pecans. With the imagery of this pecan farm I was able to build upon the plot in my head and I began writing the story. I finished in time to submit to the contest, which I think was in less than thirty days. I submitted my little novella with the title of Going Pecans.

I waited and refreshed my email everyday multiple times a day until the day I finally heard back from Avon. With a big fat no thank you. I was disappointed. But I really liked my story. I happened to see on Twitter that authors could participate in a pitch contest and I decided to pitch my little book baby. To my surprise I got a “like” and a request to read my manuscript.

Y’all, I was over the moon! A publisher was interested in my novella! I submitted everything to the publisher and quite quickly I received an offer to publish my novella. They wanted to me to expand on the story and make it a novel not novella. Which I was happy to do. I had my own editor!

I was going to be properly published and I was thrilled. We got my book ready to be printed and the publisher went under. This is unfortunately something that happens quite often with independent publishers. I was again disappointed, but now my novella was a novel and I liked it even more.

There are some publishers that will accept unsolicited manuscripts from un-agented authors so I sent mine out to several. I received responses from some and those responses were again a big no thank you.

The story of Lauren and Jack needed to be released into the world. I had a professionally edited novel, all I needed was a cover. I came up with the design that I wanted and hired a cover artist. I thought the original cover was super cute and I went ahead and published Going Pecans on my own. I even hired a narrator and produced the audiobook for this little book baby.

After publishing the book, I was happily surprised to have people purchase the book. It was exciting. Book tours were a big thing a few years ago and I scheduled one for Going Pecans. It went really well and I was able to get several good reviews.

A few short weeks after the book went “live” I received an email with a book deal for Going Pecans. From one of the top four publishers in the world! Excitement is an understatement. I couldn’t believe it. It was an incredible feeling. Until, I realized the reality that I had already published the book. Would that matter? Did I mess up my chances with this top publisher?

Panic immediately set in as I worried myself into a slow rock of what should I do? I wrote back and explained that I had already published the book and asked if that mattered? The publisher said no as long as I unpublished the book. I furthered the conversation and advised the publisher that I had already begun working on the sequel and when the contract came in for me to sign, it was a three book deal with Harper Collins!

Stay tuned for more behind the scenes and inside scoops!